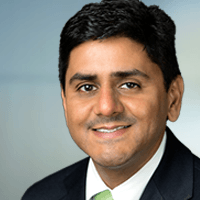 
Introduction
Numerous factors contribute to the mortality and morbidity impact influenza has on a seasonal basis. Some of those factors, such as how many people get vaccinated and how well-matched those vaccines are to circulating flu strains, are variable, making impact difficult to foresee. However, we have been following the flu season closely, and with the 2016-2017 flu season nearing its peak, the overall picture is coming into clearer focus. Below are insights we have charted relative to the severity and the strains are having on the U.S. population.

2016-2017 Influenza Season
This year, the most commonly isolated strain of influenza is H3 (>93% of flu cases). This is relevant as the H3 strain tends to have greater mortality impact. The National Center for Health Statistics (NCHS) reports that 7.9% of the deaths occurring during the week ending January 21, 2017, due to pneumonia and influenza. This percentage is not outside of the expected range, but it is above the epidemic threshold of 7.4%.

The current flu season, compared to prior years, is relatively modest in terms of population mortality at this point in time. However, given that influenza morbidity appears to still be climbing and that mortality generally lags morbidity, it is possible population mortality has not yet peaked. The chart below demonstrates this year’s flu season mortality compared to prior years. The Center for Infectious Disease Research and Policy (CIDRAP) further comments that the small increase in Influenza B detections reported in Europe may cautiously be interpreted as a signal that the later weeks of flu season are approaching. 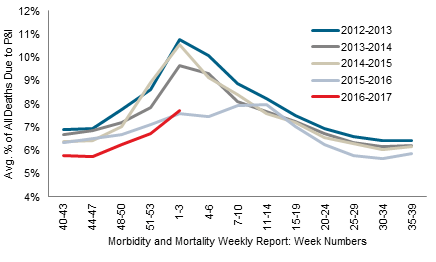 Mitigating Factors
The positive news is that
the vaccine components this year are predicted to have been reasonably matched to the circulating flu strain types. This would be a welcome change compared to flu vaccine effectiveness from prior years. Interim analysis of vaccine effectiveness is reported as 43% for infections caused by the Influenza A (H3N2) virus for the 2016-2017 as compared to just 1% for a poorly matched 2014-2015 season. There remains, however, significant room for improvement in vaccine coverage rates based off of early season reports. The CDC estimates that only 39.8% of those six months and older were vaccinated as of early November 2016, a figure that is essentially unchanged from the year prior. This could be viewed as a positive as there was some concern that there would be a drop-off in coverage given that the Advisory Committee on Immunization Practices (ACIP) recommended this year against the use of the live attenuated influenza (LAIV) nasal spray vaccine as the American Academy of Pediatrics found it to be less effective, especially against influenza A (H1N1) viruses. Also promising is the early resistance testing of confirmed influenza cases. Samples collected since October 31, 2016, have not been found to be resistant to neuraminidase inhibitors (see exhibit below), which means there are limited signs of antiviral resistance and suggests a positive response for those prescribed medications such as oseltamivir (Tamiflu).

Preparing for Next Flu Season
Just as the influenza virus constantly mutates and attacks in many forms, RGA takes a multi-pronged approach to assess harmful effects of this virus. Estimating flu-related mortality can be notoriously challenging given the complex interaction of the multiple factors outlined above. To that end, RGA has partnered with BlueDot (http://bluedot.global/), a Toronto-based group of physicians, research experts, and data scientists whose expressed mission is to use the very latest in predictive modeling, global epidemic intelligence, and visualization to more accurately forecast and even prevent the impact of infectious disease both new and old. In addition, the Longer Life Foundation, a cooperative effort between Washington University School of Medicine and RGA, has supported research to directly combat the virus itself, such as a recent study by Dr. Adrianus Boon into whether genetic variants play a role in predisposing individuals to more severe influenza-related disease.

Stay posted for further research and perspectives on the impact seasonal illnesses and infectious diseases are having on population health and mortality. Likewise, if you have questions, please contact me directly at drengachary@rgare.com.

This message is intended only for the use of the individual or entity to which it is addressed, and may contain information that is privileged, confidential, and exempt from disclosure under applicable law. If the reader of this message is not the intended recipient, or the employee or agent responsible for delivering the message to the intended recipient, you are hereby notified that any dissemination, distribution, or copying of this communication is strictly prohibited. If you have received this communication in error, please notify us immediately by telephone and return the original message to its sender. Thank you for your cooperation and assistance.