It is the responsibility of claims teams to deliver on the company’s promise. When a claim is made, the customer will be interested in two key questions:

The answer is generally yes. In the U.K., an average of 98% of death claims and 91% of Critical Illness (CI) claims are paid.

This is an obvious question but there is little published data or statistics to provide an answer.

RGA UK recently conducted a survey to determine the average time taken to settle claims. The survey looked at the length of time from claim notification until either a payment was made or the decline decision was communicated.

The survey was completed by a wide range of companies, and included some with large established books and some newer entrants. The results represent approximately a quarter of all death claims and a third of all CI claims within the U.K. market. Claims volumes for Terminal Illness (TI) and Total and Permanent Disability (TPD) claims were relatively low, but the results have been included for completeness. 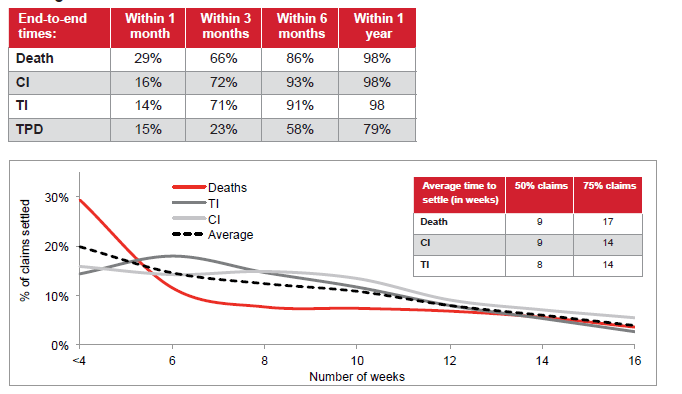 Companies show significant differences in the time taken to settle claims. The variation is particularly dramatic when comparing the number of claims settled at four weeks, when there is a difference of some 60% (as demonstrated on the following graphs). But this variation settles after six weeks, when most companies follow a similar pattern. Some variation may be attributed to the profile and maturity of the claims portfolios. We would expect newer companies to have a higher proportion of early / unexpected claims which may require closer attention and more thorough investigation. Companies 1 - 4 in the graphs below represent higher volume companies, and companies 5 - 8 are newer entrants with much smaller portfolios (<500 claims).

TPD claims are often complex and hard to assess. This is clearly reflected in the average time taken to settle these claims in comparison to death and CI claims:

This survey provides a comparative glimpse of claim end-to-end times within the U.K. The results show that there is a wide variation in the time taken to settle claims. It is clear that good end-to-end times can be achieved, but that this is not always the case, and the time taken to settle claims can be very lengthy. No single company led the way as best in more than one claim type, so all companies have scope for improvement.

‘Risk-based’ claims will always require a balance to be maintained between speed of service and prudent assessment. But long claims assessment times on events that have already taken place do not sit comfortably, especially when products are marketed and bought with the promise of financial security.

There has been a focus in recent years on improving claim payments and publishing statistics. Maybe now is the time for the industry to turn its attention to look at ways of reducing end-to-end times.


© 2013 Reinsurance Group of America, Incorporated (RGA). All rights reserved. No part of this publication may be reproduced in any form without the prior permission of the publisher. For requests to reproduce in part or entirely, please contact publications@rgare.com.

RGA UK recently conducted a survey to determine the average time taken to settle claims. The survey looked at the length of time from claim notification until either a payment was made or the decline decision was communicated. These are the results.