Factors expected to drive growth in life reinsurance include: an aging population in mature markets, progressive urbanization, ongoing formation of a stable middle class, and changing socio-demographics in emerging markets.

For more than a decade, market consolidation and declining growth rates defined the global life reinsurance sector, but these market conditions may have finally run their course. Cession rates for mortality lines, which had been shrinking in some major life reinsurance markets, appear to be leveling out, which could indicate more stable growth in the coming years. Although traditional mortality business remains at the forefront of the life1 business, global reinsurers have begun to expand their business mix. Amid business diversification, geographic expansion, and investments in innovation and digital capabilities, a number of regulatory changes are taking place globally, providing both challenges and opportunities to primary insurers and reinsurers alike.

In 2016, gross written life reinsurance premiums2 amounted to $76.2 billion globally, a 0.7 percent increase over 2015.[i], [ii] The compound annual growth rate (CAGR) was 4.2 percent between 2009 and 2016. The market is expected to grow by about 3 percent to 5 percent on a gross written premium basis in the next couple of years.[iii]

The top five players dominate the global life reinsurance landscape, holding over 71 percent of market share. They are likely to maintain their dominance, especially in the highly concentrated developed markets, despite growth opportunities for some smaller, new or regional players.

Gross premium written by the top five have increased despite a competitive and difficult market environment, mainly due to selective growth opportunities across a few product lines and demand emerging from the developing markets, especially Asia.

Factoring in the share of premiums of the top five players, the life reinsurance industry is dominated by the North American and European markets. The two regions account for over 80 percent of the global market. The Asia-Pacific region currently represents about 18 percent of the global market, but this share of premiums has been steadily increasing over the years, and is expected to reach the 20 percent to 25 percent range by 2020. 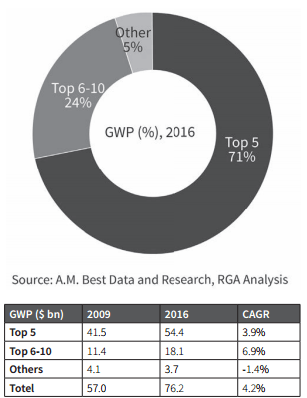 From a broader geographical perspective, the future outlook of the top reinsurers is similar, with a focus on maintaining a strong position in North America, expanding presence across Asia and providing reinsurance solutions delivering capital relief in Europe.

In terms of product diversification, the top five reinsurers maintain a substantial share of traditional mortality business, which remains at the forefront of their reinsurance offerings and represents approximately 55 percent to 65 percent of premiums. At the same time, most reinsurers are diversifying into  other growth areas such as longevity, health, living benefits and financial reinsurance.

North America remains the largest direct life market in the world in terms of premium volume, and is expected to continue to be the primary source of near-term growth. Despite continuing challenges, life reinsurers have generated fairly consistent earnings. The industry has fundamentally changed over the past decade through consolidation, entry of significant new capital, declining cession rates and InsurTech innovations.

One positive development for the U.S. market is that cession rates seem to have levelled out around the 25 percent mark. This should help stabilize the market, which has been shrinking since 2002 when cession rates reached over 60 percent. In 2015, premium volume reinsured decreased 3.5 percent from the previous year, driven by a decrease in coinsurance business, which dropped by over 10 percent.[iv] Factors driving down cession rates over the last decade or so
include increased retention by direct insurers, the availability
of alternative collateral to back reinsurance, mounting
regulatory requirements for captive reinsurance, and more
principle-based reserving of XXX/AXXX reserves.[v]

Although cession rates in the Canadian market declined from 75 percent in 2005 to 63 percent in 2015, the premium volume reinsured increased by 19 percent during the same period. The increase is mainly attributable to the growth of Canadian life insurance business, which increased by over 40 percent.[iv]

After the wave of consolidations over the last decade, analysts believe this trend in the life reinsurance market has run its course and do not expect any significant movements in the near to medium term. With the top five reinsurers now accounting for over 71 percent of reinsurance volume, the market is highly concentrated and competition is stiff.

The mortality market presents significant barriers to entry for new players. Long-established global life reinsurers are equipped with abundant capital, strong market positions and economies of scale to help navigate stringent regulatory requirements and make the long-term investments required. There have been no successful global entrants in the mortality space for the last several years.

New entrants are primarily focused on annuity reinsurance and annuity block acquisitions. Long-term opportunity in this space is driven by the number of U.S. life insurance companies with subpar blocks of businesses challenged to reach new markets or earn acceptable returns. Moreover, the low interest rate environment is pressuring annuity returns, and several smaller and mid-sized companies are unable to take on additional investment risks, thereby disposing noncore businesses to release capital for deployment elsewhere. Regulatory uncertainty has contributed to large insurers disposing of capital-intensive or volatile blocks of businesses as well.

Future long-term opportunities exist in the longevity and long-term care reinsurance markets in North America, which remain relatively underpenetrated. However, global life reinsurers that expand their risk appetite too far from their core mortality business could have trouble maintaining their financial strength over time. Their long-term success depends on their ability to maintain a sizable base of profitable mortality business while prudently pursuing new areas of opportunity.

The Latin American reinsurance markets remain relatively undeveloped, but are growing rapidly. Despite an economic downturn in the region over the last couple of years, insurers have maintained profitability due to high interest rates, rising insurance penetration rates and improving disposable income. These factors, combined with relatively lower investment returns in mature markets, have generated increased interest in Latin America among global insurance and reinsurance providers.

The regulatory landscape in most Latin American countries is progressively changing in response to international guidelines around solvency and risk-based capital rules. Mexico has been in the forefront as the first country in the region to adopt a framework modeled after Solvency II. Brazil’s regulatory body, Superintendência de Seguros Privados (SUSEP), is expected to implement the Own Risk and Solvency Assessment (ORSA) fully in 2017, making it effective by 2019. Other countries following suit include Chile and Colombia. Despite these restrictions, the anticipated growth in Latin America’s economies is expected to increase the amount of insurance and reinsurance business, as well as the proportion of the population insured.[vi]

Mature Western European markets remain the primary source of life reinsurance business in Europe. The U.K., France, Germany and Italy jointly account for over 70 percent of total life premiums. However, reinsurers have started to look at the smaller and less penetrated countries, such as those in Central and Eastern Europe, anticipating potential opportunities arising from expansion of direct insurance markets and increased demand for risk transfer

The aging population, growth in direct pension business and decline in state protection indicate potential for long-term care, longevity and other nontraditional products, such as critical illness or disability insurance. Opportunities include:

Since 2014, global life reinsurers have actively participated in longevity swap deals as pension funds and insurers started transferring longevity risks to external parties. While most deals are being carried out in the U.K., increasing demand for longevity deals has emerged in the Netherlands, continental Europe and North American markets.[vii]

Solvency II, which came into effect in Europe in 2016, is expected to create near-term business opportunities as reinsurance may be one of the few options available to insurers needing to improve their capital positions quickly. At the same time, the benefits of greater scale and diversification under Solvency II rules may reduce demand for reinsurance, especially if larger life insurers have more capacity and greater willingness to retain risks.

MIDDLE EAST AND NORTH AFRICA (MENA): The life insurance market in the MENA region is at its nascent stage of development. The region’s very low insurance penetration rate, combined with significant economic growth (despite an overall challenging macroeconomic environment), has made it an attractive market to reinsurance companies. Between 2010 and 2015, total life insurance premium volume in the region increased from US$5.8 billion to US$8.2 billion, with an annual average real rate of 8.2 percent. The region’s four largest insurance markets—Turkey, Iran, UAE and Saudi Arabia—account for about three-quarters of the total premiums.[viii]

Given the low penetration rates and robust profitability of primary insurers, reinsurers see significant income-generating potential in MENA. Insurers’ dependence on reinsurance support remains high among companies, especially in providing capacity and technical expertise to local participants. Despite a gradual increase in premium retention from primary insurers, the markets are expected to remain dependent on foreign resources in the near future.

Asian countries (excluding mature markets like Japan and South Korea) present major long-term growth opportunities for the global life reinsurance sector. Favorable conditions include low life insurance penetration rates and a rapidly expanding middle class with increasing protection needs. In absolute terms, direct life insurance premiums in Asia grew by over 25 percent between 2009 and 2015, while total global life premiums grew by 13 percent during the same period.[ix] Younger demographics, increasing wealth and improving mortality in the region are some of the contributing factors.

Despite ample growth opportunities in the region, challenges remain:

The trends in the mature markets of Japan and South Korea differ from most other Asian countries, as they are seeing a saturation in terms of premium volume and growth. A number of Japanese insurers have embarked on an acquisition spree to grow the topline and diversify geographically. South Korean insurers have followed suit, although on a smaller scale.

As life expectancy and wealth accumulation improve, life insurers may be in a position to increase revenue in these markets. Expansion may also allow diversification of product portfolios in markets that are relatively under-penetrated. This also poses new challenges, however, in terms of risk management, new product development and corporate supervision.

1 “Life” refers to “life and health coverage” and does not include property and casualty (“non-life”) risks.
2 Occurrence of the term gross written premium (GWP) throughout the article refers to assumed reinsurance premium.