The discovery may have serious implications for mortality from this common impairment – and for insurers seeking to underwrite these risks.

Sleep apnea is a chronic condition in which affected individuals’ breathing stops and restarts repeatedly when asleep, preventing the body from getting enough oxygen. The condition has a significant effect on the individual’s quality of life, general health, and mortality.

Worryingly, sleep apnea is also on the rise in many developed countries. An estimated 22 to 29 million Americans—about 12% of the adult population—suffer from sleep apnea, according to the American Academy of Sleep Medicine. That’s up from estimates of 3-7% as recently as 2008, yet the American Sleep Apnea Association suggests the condition may be underdiagnosed.

Is it possible clinicians may not recognize the right risk factors? In advertisements and popular culture, after all, the typical sleep apnea sufferer is often portrayed as a middle-aged man. What if that is not the case?

See also: Obstructive Sleep Apnea – The Killer in the Bedroom?

See also: Multi-state Models and their Applications in (Re)insurance

The model uncovered four variables that can most influence sleep apnea risk: age, severity of underlying conditions, gender, and body mass index (BMI). We also used an internal tool, Digital Health Data (DHD) Risk Scoring, to account for the severity of other medical conditions a person might have. Obesity in this analysis was a qualitative indicator whether a person has class 3 obesity or worse. After accounting for all those considerations, younger individuals with sleep apnea have the largest risk factor for mortality.

Figure 1: Relative Mortality of Individuals with and without Sleep Apnea
Note: This graph uses a subset of individuals having higher obesity and a history of using more severe drugs, but graphs using different subsets show a similar pattern with respect to age. 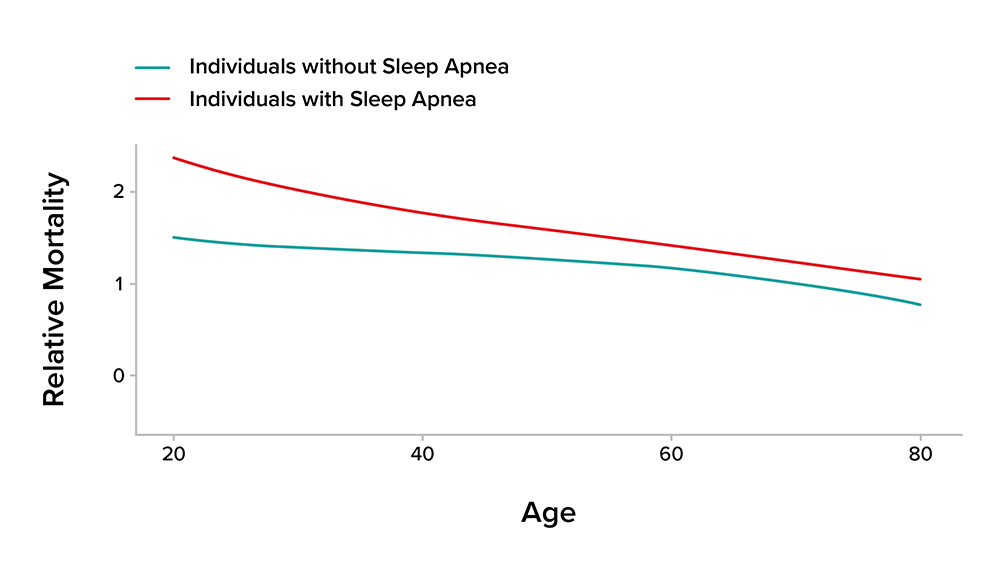 When normalizing for factors (such as obesity or gender), the multivariate survival model in Figure 1 reveals the importance of age as a risk factor in people who have sleep apnea: Relative risk for younger individuals is higher and for older individuals is lower. 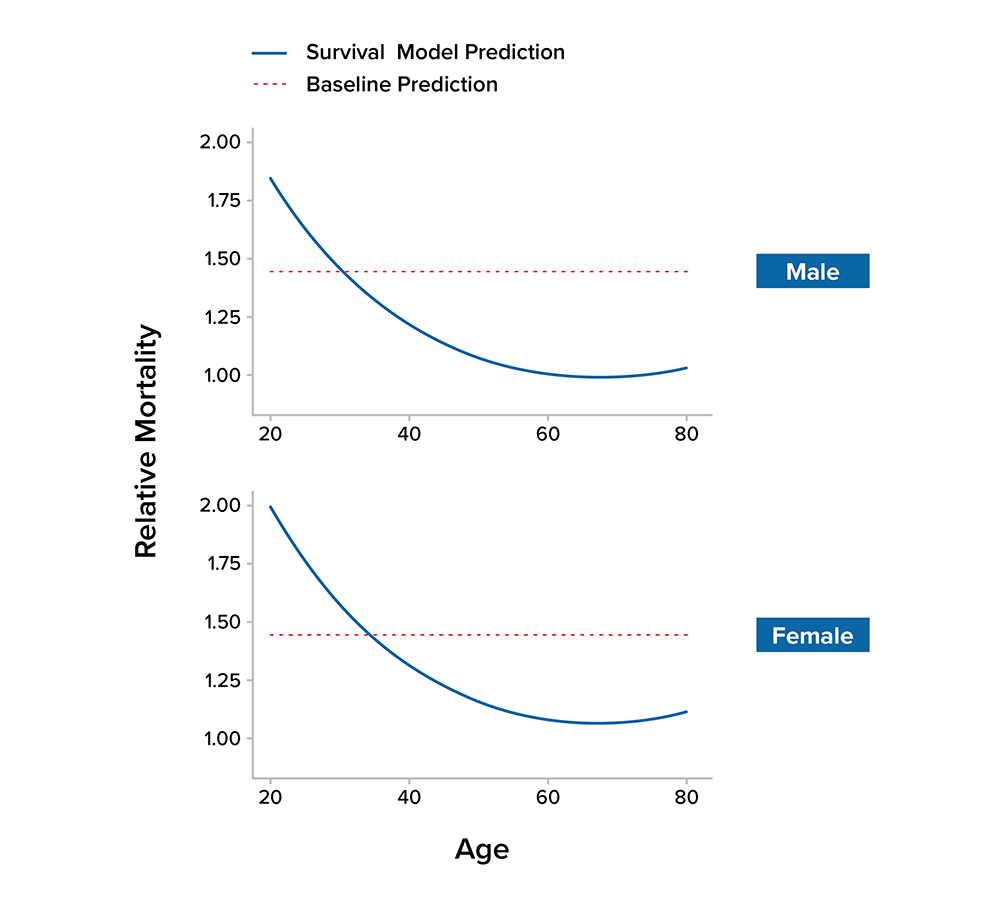 In Figure 2, overall sleep apnea mortality (dotted line) is compared with the survival model prediction among obese males and females with sleep apnea. While gender is a less significant risk factor than age, it is important to note that the relative risk for younger females is higher than for younger males.

While much of the mortality attributed to sleep apnea is believed to be due to co-morbid conditions, RGA’s modeling exercise shows that age is the most significant risk factor. The findings can guide and inform underwriting decisions when assessing individuals with sleep apnea moving forward - a risk averse approach is recommended.

Contact us to learn more about our findings, our methodology, and other related information and insights.

What factors influence sleep apnea mortality? Who is at a higher risk of dying? RGA’s expert network of data scientists, actuaries, medical directors, and underwriters worked in collaboration to answer this question through a predictive model.

Contact us to learn more about our findings, our methodology, and other related information and insights.