Will We Live Forever?

Most of us do not give much thought to this question for we all accept that we have a finite lifespan even if we put the thought of our ultimate death out of our minds until we grow old.

The cult of immortality has not disappeared – some more modern members practice the art of calorie restriction in the hope that they will extend their lives. Aubrey de Grey, the controversial theorist in the field of gerontology, believe that a structured engineering approach will be enable most people to grow older without any of the physical decline associated with aging. This is to say that he believes that science and medical technology will be able to eliminate or reverse ageing and by so doing enable us to live for an arbitrarily long time. Arguably his most infamous quote is, “I think the first person to live to 1,000 might be 60 already.”

I think it is far more likely that the average human lifespan and limit to life will comform, for the foreseeable future, with writings from ancient prophets who recorded an understanding of an average lifespan and limit to life that we are only now achieving once more. Jeanne Calment, who lived to 122 years and 164 days, is the exception that proves the rule. Also it is only in modern times that we are starting to see the expectation of life moving out to 80 years.

Recent improvements to longevity are fueling speculation that there is no limit to life. Mortality improvements running at over 3% per annum for some age groups have led to severe problems with pension funding and indeed are straining the ability
of some western societies to support their rapidly growing older-age populations. The natural tendency is then for actuaries who have got their predictions so wrong over the course of the last few decades to compensate and to extrapolate from current high rates of improvement out into the future. We are now using ever more sophisticated tools to project improvements using statistical methods.
It is my view that we should pause and ask ourselves the fundamental question: What is driving these improvements? Is it medical advances that are helping us to live longer (or at least die at a higher average age), or is it in fact mean reversion to some innate life capacity that had been repressed by squalid living conditions in the Middle Ages?

I believe that it is helpful to have a theory that makes falsifiable predictions rather than believing that the future will be similar to the past. In this regard the application of reliability theory by Gavrilov and Gavrilova to mortality provides some intriguing insights. The theory simply requires that the living organism under consideration consist of multiple subsystems connected in parallel with binomially distributed initial defects in each subsystem. Each subsystem contains redundancies, and it turns out that the process of ageing can be mathematically described as an exhaustion of redundancy. The assump-tion of initial defects leads to an exponential increase in failure rates as the organism ages.

The theory predicts that organisms that satisfy some simple assumptions obey a Gompertz-Makeham law of mortality. This is a nice result because this law of mortal-ity was first formulated in 1852. The force of mortality, ignoring mortality deceleration at extreme ages, then can be stated as µ(x) = A + Reαx. This leads to the question as to how the parameters of this law of mortality have altered with time. 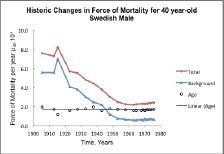 This finding puts medical advances in perspective in the sense that most mortality improvement has come from public health initiatives ensuring healthier living condi-tions, and of course from the discovery of antibiotics, immunization and medical treatments that make the survival of infectious disease and traumatic accidents more likely. It seems that medical advances made little or no impact on our ability to live longer except in the sense that if you eliminate accidental death more individuals will survive to encounter senescence.

This brings us full circle back to Aubrey de Grey. If we are to hold back or eliminate ageing, we would have to do much more than just eat healthily and exercise. It would seem that in an ideal environment that our store of redundancy in our cellular subsystems would be exhausted more slowly, but in the end we would still not live beyond the capacity for life that we started out with at birth.  Read More +

Aubrey de Grey says, rather hubristically in my view, referring to changes to the human body as we age:

“So, what are these changes? They (the ones that we have any reason to think are deleterious, anyway) are hearteningly few in number:

The engineering solutions that he suggests require futuristic technology and even tinkering with the human genome – for example, moving mitochondrial DNA into the cell nucleus to give it the greater protection afforded by the nucleus against mutations.

These approaches ignore the morality and ethics of trying to extend human life by manipulating our cell biology. They also ignore the effects of natural selection. Although nature is not perfect, it is often the case that certain mechanisms such as cell senescence protect us from other diseases such as cancer, because if cells are allowed to survive forever they accumulate errors of duplication and mutations that sometime allow them to reproduce rapidly in an uncontrolled fashion.

I think that we should instead focus on nurturing the health of mothers and young children, thereby maximising the store of redundancy that we are endowed with rather than attempting to fix things at the end of life.

So, I do not think that we will live forever and I think that we should be very wary of well-meaning attempts to fix something that may not be broken.