Opinion: Another Year Goes by Without an Invite to the World Economic Forum . . .

Consider, if you will, these two lists of diverse risk items: 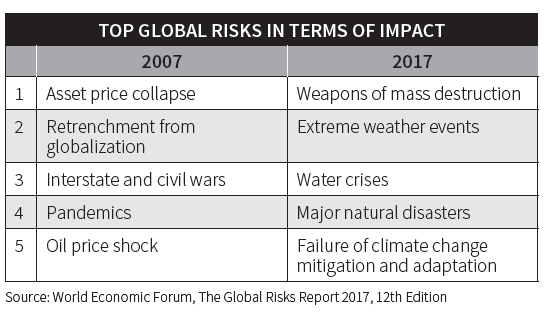 The columns list the top five global risks in terms of impact in 2007 and in 2017, according to The Global Risks Report 2017, 12th Edition, published by the World Economic Forum (WEF).

As in past years, the WEF surveyed a sizable and diverse group of thought leaders for the report on which, in their opinions, are the top five global risks in terms of likelihood and impact. The risks are organized into five categories: economic, environmental, geopolitical, societal and technological.

On 2007’s impact list, Risks 1 and 5 were economic, Risks 2 and 3 were geopolitical, and Risk 4 (pandemics) was societal. In 2017, however, the list looked completely different: None of the year’s top 5 risks were economic and only one risk—Risk 1 (weapons of mass destruction)—was geopolitical, and only one—Risk 4 (water crises)—was societal. Meanwhile, three of the top 5 risks—Risks 2, 3 and 5—were environmental—a category that was not part of the top 5 in 2007.

The report also provided an analysis of each risk factor, with some interesting insights, considering the inter-connectivity of the various risks and the impact and tendency of each risk.

It is interesting that not one risk factor survived over the 10- year period. Indeed, environmental risk didn’t make the list until 2011. There may be several possible explanations for the shifts:

I have to admire the audacity of the WEF report. It clearly states its position on the likelihood, impact, trend and the correlation of each major risk without really having a lot of data to back up its findings.

I am reminded of this quote: “Most decisions should probably be made with somewhere around 70% of the information you wish you had,” Amazon CEO Jeff Bezos said in his 2016 Letter to Shareholders. “If you wait for 90%, in most cases, you’re probably being slow.”

In this editorial, I want to review some of what were, for me, the report’s notable highlights. Ideally, I would like to try to motivate as many readers to read the paper and perhaps to provoke the actuarial profession to broaden how it views risk.

The report dates the first three Industrial Revolutions as beginning in 1784, 1870, and 1969. Each of these revolutions has specific characteristics. The first, which began in Great Britain and spread throughout Europe and to North America, moved economies from rural, agrarian bases to ones more urban and, yes, industrial. The rise of iron production, machine tools, and steam power enabled the development of factories that could mass- produce textiles and other basic necessities, and spurred tremendous economic growth. In the second revolution, existing industries as well as new ones such as steel production expanded, and new energy sources such as oil and electricity powered a rise in mass production capabilities as well as tangible technological advances (e.g., the telephone, the elevator, mass urban transportation).

The third industrial revolution, which is truly global, consists of the explosion of information and the digital capabilities making it possible. It is considered to be still ongoing, yet is also being subsumed by what is being termed the “Fourth Industrial Revolution.”

This fourth revolution (which some see as a continuation of the third and others see as a separate revolution) is already yielding several outcomes that have a high probability of changing civilizations around the world, both economically and socially. Today’s ease of remote connectivity is enabling more and more thought- based workers to be untethered from needing to go into an office. Many jobs that before required human labor are increasingly being supplemented or even taken over by technology (e.g., automation, robotics, artificial intelligence).

These outcomes have already been spurring enormous changes in employment, long one of the main sources of insurance customers. With more individuals now part of the gig (or “Hollywood hiring”) economy, workers are not only experiencing more personal financial volatility; most are also without the social protection benefits—that is, traditional life insurance, health insurance, pensions and savings benefits—generally provided by employers.

Could this trend increase demand by individuals for these insurance products?

According to the United Nations Research Institute for Social Development, social protection consists of policies and programs designed to promote efficient labor markets, diminish people’s exposure to risks, and enhance their capability to manage economic and social risks, including unemployment, sickness and old age.

I recently attended a presentation by the CEO of a leading global insurer, who generously shared his vision regarding how his company sought to accompany its customers through various life cycle stages by offering products and services that would provide social protection and add value through each stage of the life journey.

Once, adult life stages were seen only as signposts: first job, purchase of first home, first child, subsequent children, their educations, retirement planning and retirement. All of these things today come under the umbrella of “social protection.” Today, according to Mercer’s whole- of- life approach to social protection, there are no fewer than 22 lifecycle mileposts, each of which has specific age brackets and within those brackets, specific social protection needs.

Leveraging this holistic ideal of traveling with clients, the report also suggests how an individual’s social protection needs might look as the Fourth Industrial Revolution progresses. Benefits, it says, will need to be untethered from employment, structured to accommodate greater longevity and older- age morbidity, and to equalize benefits for both employees and the self- employed. Clearly, insurers, reinsurers and distribution channels need to transform how we perceive life stages as well as how we design and sell products in order to enable us to travel with the client of the future. And it is imperative that we gain both an awareness and an understanding of this need.

Of the 12 key emerging technologies identified by the report as hallmarks of the Fourth Industrial Revolution, artificial intelligence (AI) is one that has been advancing at breakneck speed.

According to PitchBook, a provider of private market data for venture capitalists, by early December 2017, the industry was on track to see just shy of US$24 billion in completed AI merger and acquisition deals. This number reflects an extraordinary surge in this activity, as in 2015, the dollar amount of global M&A activity related to AI totaled approximately $6 billion—a fourfold increase in just two years. The number of deals has risen even more strongly, with 2015 deals numbering approximately 30, and 2017 deals on track to number close to 120.

How to govern these rapidly emerging technologies, according to the WEF report, is still a conundrum: Rules and laws need to be flexible enough to enable investment and development and adapt as technologies change, but still firm enough to be able to mitigate risk. Currently, governance, the report says, is “patchy,” with some aspects regulated heavily and others hardly at all, because they don’t fit under the authority of any existing regulatory body.

AI, the WEF report continues, will have several benefits as it integrates more into daily life. Businesses will be able to use it to provide digital interfaces and services that will increase efficiencies and lower costs. Good AI governance, “would require multiple layers that include ethical standards, normative expectations of AI applications, implementation scenarios, and assessments of responsibility and accountability for actions taken by or on behalf of an autonomous AI system.”

To me, AI might have had this exponential growth precisely because of the “patchy” regulation described in the WEF report. Both countries and insurers would do well to explore the 12 emerging key technologies, but should do so judiciously, balancing market needs with market risks and being flexible enough to adjust as regulations and market needs evolve.

The Diversity Bonus: Risk Experts of the World, Unite!

At the most recent Society of Actuaries (SOA) Annual Meeting & Exhibit (October 2017), Scott E. Page, keynote speaker at the Presidential Luncheon and author of the books The Difference and The Diversity Bonus, gave an illuminating talk about the value of team diversity. Page, the Leonid Hurwicz Professor of Complex Systems, Political Science and Economics at the University of Michigan in Ann Arbor, is an economist by trade and a game theorist by inclination. He is best known for having made the initial finding that diverse groups of problem- solvers will consistently outperform groups composed of high performers, because among diverse groups there will generally be a greater diversity of cognitive tools, resulting in more
effective performance and better decision- making.

The team diversity example he cited was Netflix. Netflix saw one main value of its service was providing spot- on recommendations of a new film and/or TV series to existing clients, leading to higher persistency. Netflix had an algorithm to predict customers’ tastes based on past viewings but it wanted to do better. In 2006 Netflix offered a prize of US$1 million to anyone who could improve its recommendations by more than 10 percent. Many teams vied for the prize, but the eventual winners, named in 2009, were mega- teams composed of several of the original competing teams. With so many diverse tools and capabilities, these teams were able to create collections of diverse models that successfully improved the existing predictive model by 10 percent. Essentially, the aggrupation of certain teams provided a “diversity bonus,” enabling the delivery of a superior result.

Could a group of actuaries, working together with risk experts from, say, the WEF, be able to create a team sufficiently diverse to provide an enhanced and superior assessment of global risk? An ambitious goal for actuarial professionals would be to obtain a seat at the table at the Forum in order to contribute to the discussion of risk trends.

Actuaries are often challenged to accept a wider role to serve the greater society. I can think of no better global initiative for us than saving the planet we have.
The views expressed in this article are solely those of the author and do not reflect the views of either his employer or the Society of Actuaries.

Is it time for actuaries to broaden their approach to risk? A view of the findings from The Global Risks Report 2017, published by the World Economic Forum (WEF).