Incidence of thyroid cancer has been increasing worldwide, largely due to greater use of body imaging with ultrasound and subsequent fine needle aspiration (FNA) for incidentally discovered thyroid nodules.1

The histology of PTC is characterized by a papillary growth pattern. Papillae are tongue-shaped structures with one or two layers of tumor cells surrounding a well-defined fibromuscular core. Follicles are usually absent. The nuclei of the malignant cells appear large, oval, crowded, and overlapping, and may contain hypodense powdery chromatin, pseudoinclusions, or nuclear grooves (also called “orphan Annie eyes”). PTC is typically unencapsulated.

PTC is also often multifocal, either due to lymphatic spread within the thyroid gland or field change, with the development of synchronous tumors which are locally invasive and can spread to local lymph nodes in the neck. Distant spread may also be present in up to 10% of cases at the time of diagnosis, with lung and bone being common sites.

A scoring system based on tumor size and shape, membrane irregularities, and characteristics of the chromatin is used to make the diagnosis of PTC.

FTC has a completely different histological appearance from PTC. The architecture in good prognosis tumors shows well-differentiated epithelium forming follicles containing colloid. In poor prognosis tumors, the cells are poorly differentiated, growing as a solid mass without forming follicles. The nuclei do not have the features seen in PTC. There can be invasion of the blood vessels and also the tumor capsule. 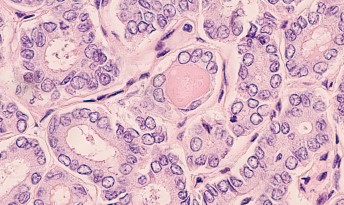 When thyroid cancer is suspected, an ultrasound exam is performed, followed by fine needle aspiration of the thyroid lump. Microscopic examination of the cells enables the pathologist to recognize the typical changes of the nuclei associated with PTC.

For follicular tumors, however, it is not possible for a pathologist to tell the difference prior to surgery between a benign follicular adenoma and malignant FTC. Examination of the thyroid lobe after surgery to identify the tumor capsule and assess vascular invasion is required for a diagnosis of FTC. 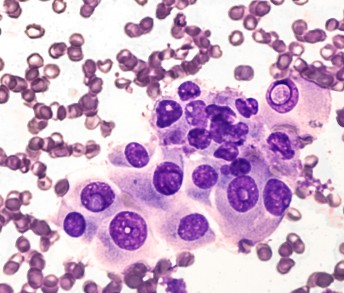 There are several systems for staging DTC. Each uses a core set of data that usually includes age at diagnosis, size of the primary tumor, extent of local extrathyroidal extension, and the presence or absence of distant metastases. However, there are sufficient differences among the systems that they are not interchangeable. The TNM system shown in Table 1 appears to be the best for predicting disease-specific mortality.5

Outcomes, stage for stage, are very similar for PTC and FTC. Mortality from PTC increases progressively with advancing age, starting around age 35. Using the cut-off of age 55 appears to be the most reliable for categorizing risk.6 Thyroid cancers arising from the follicular cells of the thyroid gland, however, display a spectrum of biological behaviors ranging from papillary microcarcinoma in the elderly, for which prognosis is generally excellent, to the highly lethal anaplastic thyroid cancer, which has a 10% to 20% survival rate at one year.

The subtypes of PTC and FTC have important influences on outcomes. Excellent outcomes are associated, for example, with non-invasive encapsulated FTC and with follicular variant papillary thyroid cancer (FVPTC). The more aggressive variants – poorly differentiated thyroid cancer, tall cell variant, hobnail variant, and columnar cell variant – tend to have poorer outcomes. Several other histological features, such as perineural invasion, multifocal disease, and high mitotic rate, may influence the prognosis as well. However, these histological features are not included in the staging system of the American Joint Committee on Cancer (AJCC) as there are no absolute pertinent cut-points.

Tables 1 and 2 illustrate the AJCC staging system,7 which is based on TNM (tumor, node, metastasis) parameters (Table 1) and uses the age 55 cutoff for the prognostic subgroups (Table 2). Pathological staging of cancers is based on findings at surgery for extrathyroidal spread and the pathology of the surgical specimen. Nodal involvement and distant metastatic spread may only be detected by radioactive iodine scans which are performed one to three months after surgery.

In addition to staging at diagnosis, the American Thyroid Association8 also recommends additional staging to predict risk of recurrence, risk of persistent disease, and to modify the risk estimate based on response to therapy. Factors such as serum thyroglobulin four to six weeks after initial surgery, calculated thyroglobulin doubling time, radioactive iodine uptake, and avidity of FDG uptake on PET scans may also influence the prognosis.

Most patients with DTC do not die of it: long-term cancer- related mortality is less than 5%.3 Multiple studies confirm that DTC mortality increases progressively with advancing age but even older patients (65+ years) in the SEER database still demonstrate 95% survival at five years.

Tumor size is important for prognosis. Tumors of less than 1.5 cm in size are universally cured, but mortality increases with tumor size. Twenty-year mortality for tumors measuring between 2.0 cm and 3.9 cm, for example, is 6%, and increases to 50% for tumors 7.0 cm or larger.9 Involvement of the regional lymph nodes is also an important adverse factor, particularly when associated with T4 tumors or M1 disease. However, small volume nodes have little impact on survival particularly at younger ages (<45 years), as they can be effectively eradicated by radioactive iodine therapy.

There are more than 10 variants of PTC,10 including follicular (the most common), tall cell (more aggressive), insular, hobnail, and diffuse sclerosing variants (Table 3). FVPTC, which represents 30% to 40% of all cases,11 has an architecture of follicles rather than papillae, and the malignant follicular cells show the characteristic features of PTC.

There are two main subtypes of FVPTC: encapsulated (EFVPTC), which represents the majority of FVPTC, and non-encapsulated or infiltrative (NFVPTC). The two subtypes have clearly different clinical and biological behaviors. They also differ in their molecular profiles, with the BRAF V600E mutation seen in the infiltrative tumors and the RAS mutation in the encapsulated tumors.

A substantial number of FVPTCs are neither encapsulated nor infiltrative, but instead are partially encapsulated or well-demarcated. They have a similar molecular profile to EFVPTC, with the RAS mutation seen in nearly half the cases (46%) and no BRAF V600E mutation seen.

In the last 20 to 30 years, incidence of encapsulated thyroid tumors has risen two to threefold and now represents 10% to 20% of all thyroid cancers in Europe and North America. These tumors generally have an indolent course and following limited surgery (removal of the affected lobe rather than the whole thyroid gland), they very rarely relapse or spread to distant sites. To avoid overdiagnosis and overtreatment, these tumors were downgraded from cancer to neoplasm in 2017.

In 2016, an international working group of expert thyroid pathologists convened by the National Cancer Institute reported on a study of 109 patients diagnosed with EFVPTC.13 At a median follow-up of 13 years there were no episodes of recurrences or spread in these patients. This was not, however, the case for patients with the invasive form of FVPTC. Because of these results, the working group recommended that EFVPTC be called “non-invasive follicular thyroid neoplasm with papillary- like nuclear features” (NIFTP).

This change in nomenclature and classification was subsequently accepted by the World Health Organization (WHO) and was included in the 4th edition of the WHO Classification of Tumors of Endocrine Organs, published in 2017.14 NIFTPs are now usually treated by removal of one lobe of the thyroid and radioactive iodine treatment is omitted.

Diagnosis of NIFTP is based on strictly defined inclusion and exclusion criteria, which are outlined in Table 4. The assessment of whether a tumor is non-invasive or invasive cannot be made until the tumor and its surrounding capsule have been removed by lobectomy. The pathologist needs to examine the entire capsule carefully to determine if there is any invasion  by cancer cells or any lymphovascular invasion.Thus, the diagnosis can only be made after surgery, not pre-operatively.

The average size of an NIFTP is 3 cm, but they can vary from microtumors (<1 cm) to as large as 10 cm. They can also be multifocal or affect both lobes, and can be found in a thyroid gland containing an invasive tumor.

From the perspective of assessing critical illness (CI) claims, it is important to be aware that not all EFVPTC cases have been downgraded from cancer to NIFTP. The strict criteria for diagnosing NIFTP highlight that there should be no invasion into the capsule or into the adjacent thyroid gland for well-circumscribed tumors.

The MDT recommended completion of the thyroidectomy followed by radioactive iodine treatment. Pathology examination of the left lobe did not show any cancer.

This case was accepted as a valid critical illness claim as this cancer was showing signs of invasion with involvement of the tumor capsule.

This case was accepted as a valid critical illness claim, as it was reasonable to conclude there was vascular invasion within the tumor capsule.

The current approach for assessing critical illness claims for EFVPTC without evidence of tumor capsule invasion is to view it as a non-cancer.

Upon review of the claim, the terminology in the pathology report was felt to be consistent with what is acceptable for the diagnostic criteria of a NIFTP. This claim was therefore determined not to meet the definition of cancer as defined by the policy provision, as there was no evidence of invasion nor was the neoplasm diffuse in nature.

This case highlights the difficulty of making a clear diagnosis even for an expert thyroid pathologist. The key clinicians in this MDT (surgeon, pathologist, radiologist, and oncologist) took into consideration the clinical findings and pathology in order to reach a final diagnosis and decide upon a treatment plan. If there was doubt about the pathological diagnosis, they could have also asked for an opinion from a regional or national expert.

For follicular patterned thyroid tumors, such as this case, the WHO classification system recognizes there are tumors of “unknown malignant potential,” which describes the uncertainty of the biological behavior of these tumors. The recognized types are called:

For DTC CI claims, assessment of cancer invasion depends upon evaluation of the tumor capsule, vascular invasion, and local spread within the adjacent thyroid and the lymph nodes.

EFVPTC meeting strict inclusion and exclusion criteria, defined by an expert international panel of pathologists, are now known as NIFTP. Downgrading these tumors from cancer to neoplasm recognizes that many of the cases are non-invasive tumors with excellent prognoses and so can be safely managed by limited surgery. This will enable these patients to avoid the complications of removal of the whole thyroid gland and radioactive iodine therapy. From the insurance point of view, these neoplasms generally would not meet the strict definition of “cancer” as defined by most CI policy provisions. Nonetheless, these cases should be reviewed carefully to ensure accurate and fair adjudication.