Statistical significance is widely used. Many researchers use the concept to confirm their theories. Others use it for data exploration, trying to determine what variables are “important” in their particular area of study.


There is growing skepticism about the use of this methodology. Some suggest it does not tell us what we want to know (Ioannidis, 2019). Others suggest that statistical significance has set back scientific research in general (Wassertein and Lazar, 2016). Many advocate that we should stop using p-values all together (McShane, Gal, Gelman, et al., 2019). This article explores the problems with statistical significance and suggests a commonly accepted pathway forward.

Why is Statistical Significance Used?

Statistical significance does not represent substantive significance. Notably missing from the definition above is any discussion about the degree to which an effect is important. This is because statistical significance does not tell us if we have discovered an important effect. Instead, these tests tell us whether or not our confidence interval (at whatever chosen level) contains zero. This means that our effect estimates can be small and large, with variable uncertainty, and retain statistical significance. As a result, two important questions go unanswered. First, what is the size of the effect? (Does it matter?) Second, how certain are we about the size of the effect?

Returning to the example above, let’s again try to determine the effect of income on mortality (B). Assume that we have conducted three observational studies to understand this relationship. Each study has returned an estimate of B, and in each case, the effect is statistically significant. In a total vacuum, we might want to conclude that each study indicates that income affects mortality. But we know that statistical significance omits key information, so we would be left wondering if the effect was important.

Scholars have suggested graphically illustrating estimated effects from quantitative studies (Gelman and Paradoe, 2007). In general, these graphs should demonstrate several aspects of the results. First, they should display the effect of interest (the average effect). For example, we might plot the coefficients from a regression model (when interactions are absent). Second, these figures should illustrate the degree to which we are uncertain about the presented estimates. For instance, we could plot confidence intervals in addition to coefficient estimates from a regression model. With this information, an analyst can better understand the degree to which a variable affects an outcome of interest.

Figure 1 demonstrates that three statistically significant findings can represent different substantively meaningful findings. Returning to our previous example, Figure 1 displays three estimates of the effect of income on mortality, with 90 percent confidence intervals. As noted previously, each result is statistically significant at the 5 percent level, because each confidence interval does not contain zero. 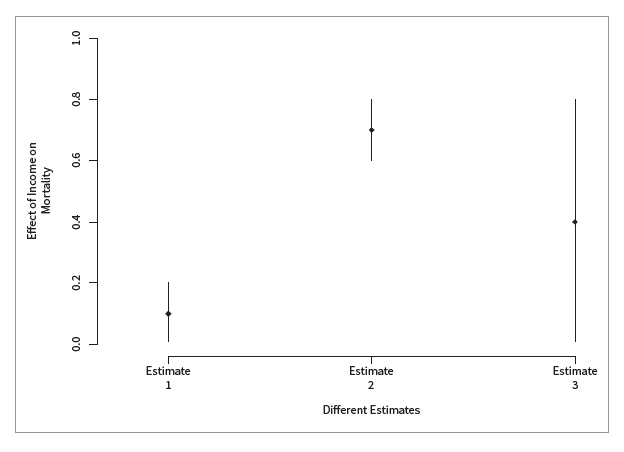 The previous example provides a path for analysts to understand how variables of interest affect mortality. Other ways analysts can check the value of their findings is by looking at measures of model fit (if a model is being used). For example, if an analyst is adding income to a model of mortality, they could show that the additional variable reduces the out-of-sample error for the model. This model fit can be estimated using holdout data or leveraging a fit statistic like AIC or BIC.

In uncertain times, the certainty of statistics can seem like a balm, but is the concept of statistical significance misunderstood — and misused? In an issue of the Society of Actuaries' publication Predictive Analytics and Futurism, RGA's Rosmery Cruz explains how dogged pursuit of the statistically significant p-value, or greater than .05, can be misguided. She also shows how graphical visualizations can help the analyst better interpret the relationships found in data sets.