Calorie Restriction (CR) – What is it and what does the research tell us?

Preventing non-communicable diseases and promoting healthy aging are both important in improving long-term health and reducing levels of frailty in the elderly. Extensive research in animals shows that a 30-50% calorie restriction (CR) without malnutrition increases lifespan by 30-50% and reduces incidence of chronic diseases.


Studies on humans show that mortality from coronary heart disease and cancer is significantly lower in individuals consuming a CR diet with sufficient protein and nutrients. In humans, CR refers to energy intake that is sufficiently low to achieve or maintain a low-normal body weight (BMI <21 kg/m2) without causing malnutrition. CR has been found to slow aging and increase lifespan in rodents. It also protects against obesity, insulin resistance, hypertension, inflammation, and atherosclerosis in humans - all major causes of disability, morbidity, and mortality.1,2

Aging is a result of cell damage from free radicals that are produced naturally in the body. Free radicals are created by the metabolic process, so a slower metabolic rate decreases the production of free radicals. Reduced calorie intake reduces the metabolic rate as there is less food for the body to break down and process. Since calorie restriction usually leads to weight loss, the body requires less energy to maintain the reduced weight.3

Aging is associated with myocardial fibrosis and atherosclerosis, useful indicators of a person’s biological age. It is also associated with homeostatic imbalance and altered autonomic dysfunction, which results in a decline in heart rate variability. Heart rate variability (HRV) is the heart’s ability to change its rate according to the body’s physical and psychological demands, varying between the lowest heart rate and fastest heart rate. HRV decreases with conditions such as heart disease, hypertension, obesity, and inflammatory disease. Studies suggest the HRV is a reliable tool in the assessment of autonomic function and could be used as a marker of biological age, a measure that is currently not applied in the pricing and underwriting of life insurance policies.4

The effect of CR on heart rate was studied in a small cohort of individuals who practiced CR over an average of 7 years. Researchers found that the CR group had a significantly lower heart rate and better HRV profile than the health group who followed a Western diet (WD).

Aging also increases the risk of infection due to a decline in immunity, referred to as immune senescence. Cellular senescence, a state of irreversible growth arrest, is a basic function of aging and accumulates as years pass. CR causes alterations which protect against age-related diseases and reduces inflammation, delaying or preventing age-related senescence.5

What impact does CR have on the body?

It is difficult to establish the true effects of CR diets on aging and longevity because there are currently no validated biomarkers of aging and establishing clinical trials on CR in humans could lead to significant health issues. To date, there are only a few human studies which show that CR diets improve health and longevity, for example the CALERIE trial, the Okinawa study, and the Calorie Restriction Society study.

The CALERIE 1 trial was a two-year multicenter randomized controlled trial designed to measure the short- and long-term effects of a 25% calorie restricted diet in young and middle-aged healthy adults. After two years, despite the group only achieving a 11.9% CR, CR achieved a reduction in all cardiometabolic risk factors including cholesterol, blood pressure, and weight and also resulted in a marked improvement in CRP, glucose tolerance, insulin sensitivity index, and metabolic syndrome score.10

The multi-center results showed that, compared to the ad libitum (AL) control group, moderate CR reduced serum LDL-cholesterol by 7%, from 2.51 to 2.33 mmol/L. There was a corresponding increase in serum HDL-cholesterol, from 1.26 to 1.36 mmol/L, and a reduction in triglycerides, from 1.15 to 0.90 mmol/L. See Figure 1 and 2.

Figure 1 and 2: Percentage change in cardiometabolic parameters, adapted from reference.10 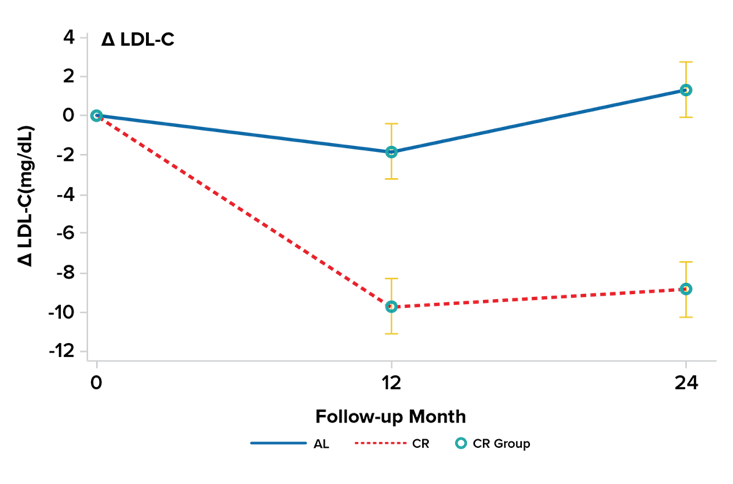 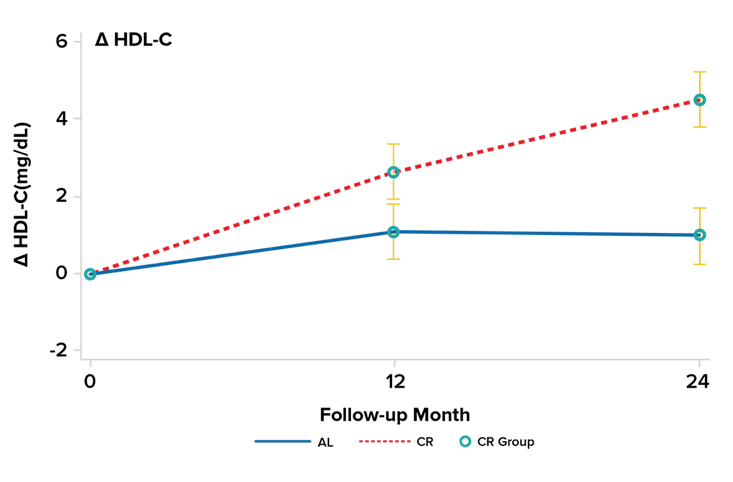 CR also resulted in a significant reduction in both systolic and diastolic blood pressure and markedly improved insulin sensitivity, while it reduced both plasma-fasting glucose levels and glucose-stimulated insulin concentration.  See Figure 3 and 4.

Figure 3 and 4: Percentage change in cardiometabolic parameters, adapted from reference.10 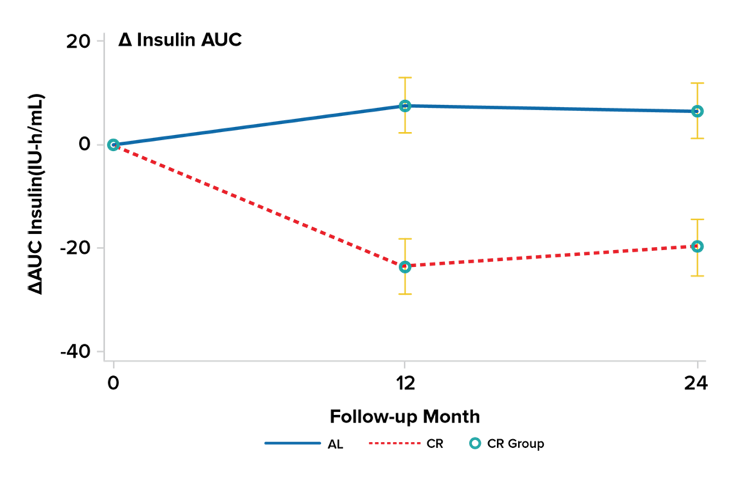 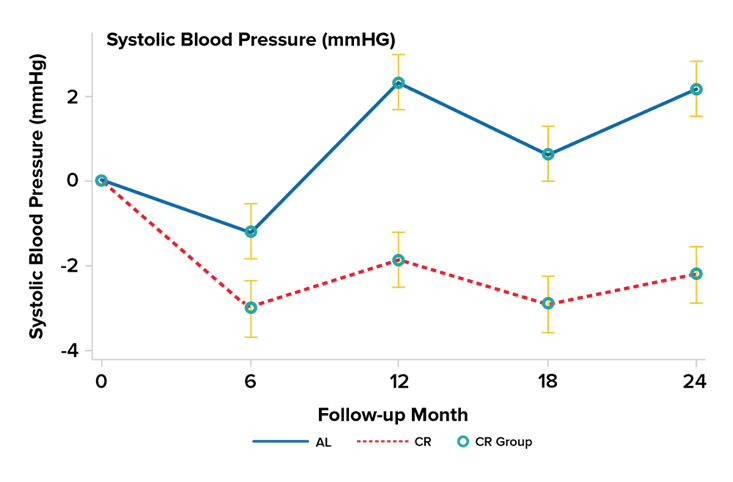 There are a few human studies of involuntary or natural episodes of CR that were not accompanied by malnutrition due to food restrictions with adequate consumption of essential nutrient-dense foods enforced by local governments. For example, during World War I, the Danish population was forced to reduce food consumption for two years. As a result, there was a 34% reduction in mortality. This large reduction in mortality was also observed in the Norwegian population in Oslo after World War II when a forced 20% CR without malnutrition resulted in a 30% decrease in mortality. 2

The Calorie Restriction Society (CRS) is a group of individuals who voluntarily restrict calorie intake to prove CR will increase longevity. They consume about 30% fewer calories per day than people who eat a typical Western diet. The Calorie Restriction with Optimal Nutrition (CRON) study, using data from members of the CRS, showed that CR provided protective effects against obesity, diabetes, inflammation, and LV diastolic function. The cholesterol/HDL ratio was 2.6; triglycerides were in the 50 mg/dl range; systolic/diastolic blood pressure was 110/70 mmHg, even in those age 70 and over; and CRP was barely detectable. Carotid artery intima media thickness was 40% less in the CR group than in the comparison group; LV diastolic function was similar to people who were 16 years younger; and HRV in the CR group was comparable to healthy men and women 20 years younger.2, 11

CR reduces the risk of chronic diseases, such as cancer, diabetes, heart disease, obesity, and Type 2 diabetes, and delays biological aging in humans. Studies show CR individuals have greater insulin sensitivity, lower blood pressure, improved lipid profile, reduced oxidative damage, and reduced markers of inflammation, such as CRP, compared to non-CR individuals. However, calorie restriction is not practical for most people and it is difficult to maintain long-term, despite the significant morbidity and likely mortality benefits. This does not, however, mean the study of CR is without merit or does not have broader applicability. This line of research has provided significant insights into dietary effects on human metabolism and overall impacts on health, illness, aging, and possibly lifespan.

This article is the first in a three-part series, highlighting areas of research funded by the Longer Life Foundation (LLF), a not-for-profit organization that supports the study of scientific and public health factors predicting mortality, morbidity, longevity, and wellness. The LLF is a collaboration between the Reinsurance Group of America (RGA) Incorporated, and Washington University School of Medicine in St. Louis.

Dr. Luigi Fontana, an internationally recognized physician scientist, and his colleagues completed much of the research on calorie restriction discussed in this first article. Dr. Fontana studies health and longevity, with a focus on calorie restriction, endurance exercise, and metabolism. He is currently the Leonard P. Ullmann Chair in Translational Metabolic Health at the Charles Perkins Centre in Sydney, Australia where he directs the Healthy Longevity Research and Clinical Program. Dr. Fontana is an Adjunct Professor of Medicine at Washington University in St. Louis, Missouri, USA. The Longer Life Foundation partially funded much of his initial work on calorie restriction. (Refs 1,2,4,5,6,9,11).