The unusually high and unexpected losses experienced by individual income protection (disability) insurers in Australia stemmed from several causes, from underestimating the length of time disability claimants would stay on claim (due to poor product design) to ineffective claims management practices. 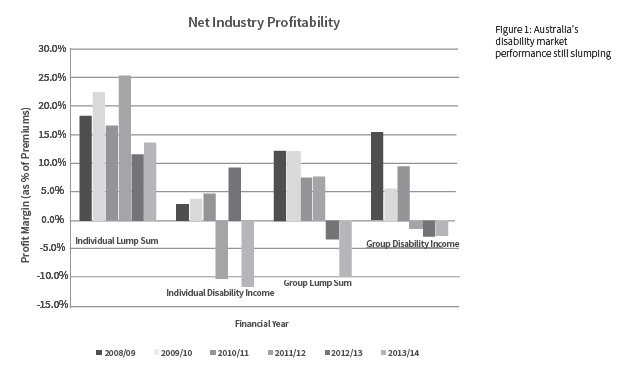 
The most common explanation offered for the Australian market’s group disability losses is that the environment had changed so rapidly over the prior decade that using past claims experience to credibly price large group policies had become an unreliable predictor of future claims experience.

However, no one could have anticipated that claims experience would deteriorate as rapidly as it did from 2011 to 2013. Losses in 2013 were quite extreme, contributing to the country’s four largest reinsurers collectively increasing reserves by more than US$1 billion.

These losses sparked a genuine push for structural change in Australia’s group disability market. Price increases alone are not likely to return group disability to sustained profitability. Changes to product design, conditions around eligibility for group cover and a paradigm shift in how claims are managed are essential.

Fortunately, by the end of 2014, many Australian life insurance companies had either completed or were planning to revise their claims practices. Some
were even revisiting their entire approach to claims management.

Innovation -- Burn it to the Ground

The global life insurance industry has witnessed several innovations over the past decade. Companies in many markets have moved from offering participating
to nonparticipating (risk-only) life policies. Critical illness cover, invented 25 years
ago and then covering only four impairments, has evolved into a range of offerings including severity-based, multi-pay, early-pay and single impairment policies. Insurers have also developed and introduced functional impairment disability policies to supplement and sometimes replace occupational disability policies.

Underwriting rules engines (UREs), which have been automating new business processes for life insurance companies around the world for more than a decade, were relatively late to Australia, yet were vigorously embraced. The country is now a leading user of e-underwriting.

Until recently, however, claims processes in Australia had seen little innovation. Indeed, few Australian insurers today have automated claims workflow systems. Over the past year, though, the country’s life insurers have been implementing
a once-in-a-generation sea change in claims management, with changes ranging from automating claim workflows to comprehensive makeovers of the claims management process.

These changes were vital: The market could not continue to handle rising incidence rates and claims payment volumes, and insurers understood that rapidly growing demands on claims professionals needed to be addressed. Pricing and product features may repair future generations of claims risk; however, companies need to address now how to improve the current handling of growing claims volumes and risk exposures.

The goal of disability claims management is to provide necessary services, using appropriate resources, in cases where the claimant has the potential to recover, in order to promote maximum recovery and productivity.

Life insurers in Australia know that effective claims management can bring immediate bottom-line results. Hence, some are looking to invest as much as A$50 million (US$38 million) in the development of new claims systems and processes in the coming years.

Return-to-work and rehabilitation programs are proven, effective tools in disability claims management. However, the true potential of these management tools as well as others, if used smartly and effectively, has only recently become apparent.
The industry is also benefiting from ideas found to be effective in other countries and for affiliated industries such as workers’ compensation.

In the late 1990s, Canadian group disability insurers, under pressure for improved results, substantially reinvented their approaches to claims, which shifted the paradigm from claims adjudication (centered largely on the eligibility decision relying on medical diagnosis) to holistic case management (which extends its lens beyond the medical to such important elements as functional and vocational workplace factors).

Not only did this broader perspective substantially impact eligibility decisions, it also
provided the necessary under-standing to properly manage a case to a positive resolution.

Canadian claims operations that have not already evolved to “best practice” are under considerable pressure to do so, due to challenges such as:

• Greater complexity in mental illness claims, and the increased presence of “coping with life” issues that are not specifically labeled as mental health. A preponderance of such claims are occurring among individuals under age 40, frequently indicating difficulty coping with “sandwich generation” stress (simultaneous demands of child care and elder care), financial strain prolonging working careers (especially stemming from the financial crisis), marital breakdowns, and reduced resilience (or perhaps willingness) to work while managing unwelcome and stressful life changes.

• As in most developed markets, Canada’s population is ageing rapidly and a massive exodus of its Baby Boomer labor force is expected through the coming decade. Newer workforce members pose a high level of uncertainty in terms of disability incidence rates and cultural receptiveness to the industry’s claims management techniques.

• The continual and staggering rise of obesity throughout the world’s population is also evident in Canada. Obesity is linked to impairments such as diabetes and cardiovascular disease as well as to mental and other health conditions.


Focus on prevention and minimization of illness and disability impact.

“Best practice case management” is a model that focuses on prevention and minimization of the human and economic impact of illness and disability. Moves toward this model in Canada have thus far resulted in considerable gains for the country’s employees and employers. Active stakeholder engagement is central to the approach, involving the employee and employer, the insurer, treatment providers, and union representatives (where applicable). The end result is optimized quality of care, improved productivity and return-to-work rates, organizational health, and as a welcome by-product in Canada, regulatory compliance.

A growing body of medical and psychological research literature provides evidence that work is healthy and contributes to both quality of life and longevity. According to Ms. Vandenhurk, claims decision-makers need to believe they are doing good, seeing themselves as promoters of health and productivity.

In our view, a similarly holistic approach to claims management is much needed in Australia. Such an approach, with a focus on incorporating claims assessment, planning, management, with medical and vocational aspects, workflow, use of resources and quality assurance, can help realize a lasting transformation of claim practices. Process improvements are achievable, and change is possible, as many of the practices are reasonably simple to understand, perhaps more challenging to implement, yet fundamentally all the same.


Reinsurers and insurers have been leading the way in implementing new claims management practices in Australia since 2014. Going forward, continued investments in claims systems, processes and professionals will be critical for Australia’s insurers. The disability claims management innovations of the past few years are now part of Australia’s claims landscape, promising stronger and more effective financial outcomes for insurers. Investment in claims transformation and paradigm shifts are much welcomed, and promise to continue for several years to come. The resulting effect on the Australian market could be as exciting and grand as the rebirth of the mythical phoenix.

This article was adapted with permission from an earlier piece appearing in the Asia Insurance Review, “Special Focus on Life Reinsurance,” June 2014 edition. This appeared in Reinsurance News of the Society of Actuaries and is republished with consent.

The mythological phoenix is known for spectacularly regenerating from its ashes every century. Australia’s life insurance industry needs something special to rise from its ashes; claims management innovation promises to give the necessary impetus.